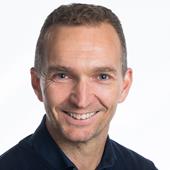 Magnus Berggren (Linköping University, Sweden) received his MSc in Physics in 1991 and graduated as PhD (Thesis: Organic Light Emitting Diodes) in Applied Physics in 1996, both degrees from Linköping University. He then joined Bell Laboratories in Murray Hill, USA, for a one-year post doc period focusing on the development of organic lasers and novel optical resonator structures. In 1997, he teamed up with Opticom ASA, from Norway, and former colleagues of Linköping University to establish Thin Film Electronics AB. From 1997 to 1999 he served Thin Film as its founding managing director and initiated the development of printed electronic memories based on ferroelectric polymers. After this, he returned to Linköping University and to a part time manager position at Acreo Swedish ICT. In 1999, he initiated the research and development of paper electronics, in part supported by several paper- and packaging companies. Since 2002, he is the professor in Organic Electronics at Linköping University and the director of the Laboratory of Organic Electronics, today including around 60 researchers. Magnus Berggren is one of the pioneers of the research areas Paper Electronics, Organic Bioelectronics and Electronic Plants and currently he is the acting director of the Strategic Research Area (SFO) of Advanced Functional Materials (AFM) at LiU. He is also a co- founder of several companies, such as Invisense AB, DP Patterning AB, Ligna Energy AB and OBOE IPR AB. In 2012, Magnus Berggren was elected member of the Royal Swedish Academy of Sciences, in 2014 he received the Marcus Wallenberg Price and in 2016 he was awarded the IVA Gold Medal.