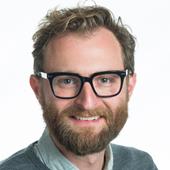 Daniel Simon, Associate Professor, received his BSc in Physics in 2000 from the Univ. of Georgia, Athens (USA). In 2001, he began his graduate studies in Physics at the Univ. of California, Santa Cruz. There, he joined the laboratory of Sue Carter, studying a range of topics in polymer-based electronics. In 2004, he received his MSc, based on electronically patterned films on micro-electrode arrays. In 2007, he earned his PhD, based on light-emitting electrochemical cells (LECs) and nanoparticle-based non-volatile. Later that year, he joined the Laboratory of Organic Electronics as a postdoctoral researcher, where he focused on converting in vitro delivery technology for use in vitro, and later for self-regulating artificial neuron functionality. He has been a key component in creating and developing e-plant technology, beginning with the first functionalized xylem experiments in 2008. From 2009-2011, he held a dual position at the Karolinska Institute, where he further developed sensor feedback control in vitro. Since 2011, he has led – and significantly expanded – the Organic Bioelectronics group of the Laboratory of Organic Electronics, becoming Asst. Prof. in 2013 and Assoc. Prof. in 2016.