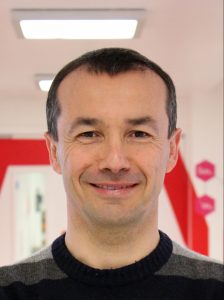 Senior Researcher Dr. Eric CLOUTET received a PhD in polymer chemistry from the University of Bordeaux in 1996 and did a postdoc at the University of Akron (Ohio, USA) in 1997. Then, he joined the CNRS at the University of Paris 13 and moved to the Laboratoire de Chimie des Polymères Organiques (LCPO, Univ. Bordeaux) in 2001. He is currently a CNRS senior researcher at LCPO working on the design and formulation of advanced functional polymers for applications in energy, lithography, optoelectronics, batteries, photovoltaics, (flexible) displays, etc. His research interests include the development of various homo- and copolymers based on a π-conjugated sequence as well as original (co)polymers via various polymerization routes both in homogeneous and heterogeneous media. He has co-authored 113 papers and co-filled 21 patents (h-index = 31, source web of science™ 2017).