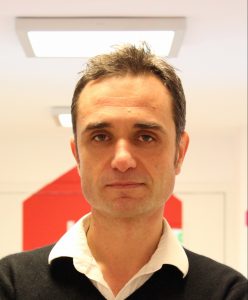 Assistant Professor Cyril Brochon received his PhD in polymer chemistry from the University of Bordeaux in 1999, where he studied the synthesis and anionic polymerization of novel silicon-based heterocycles. Then he moved to Charles Sadron Institute (ICS, Strasbourg) where he was specialized in controlled radical polymerization. In 2001 he joined the team of Prof. G. Hadziioannou at the École européenne de Chimie, Polymères et Matériaux (ECPM, Univ. Strasbourg) as an assistant professor, where he worked on the design of functional polymers, including semi-conducting polymers and block copolymers. In 2009, he joined the LCPO in Bordeaux as an associate professor and he continues working in the group of Prof. Hadziioannou on the design of advanced functional polymers for applications in energy, optoelectronics, photovoltaic, (flexible) displays, etc. He has co-authored 70 publications and 12 patents (H index = 2).